QR Motion is a project based on QR Code technology. QR code is a kind of 2 dimensional barcode which has a wide range of uses. Due to its high efficiency and excellent performance in error correction, it is now one of the most popular ways to store text or other information in barcodes.

There are existing QR decoding applications on Android like AT&T Scanner and Zebra Crossing barcode scanner. All these applications on mobile devices provide QR Scanning and online or offline translation of a single static QR code. Once the smartphone detects a QR code, it will stop detecting and decode the information in the received code.

The current QR code can expand its capacity by simply increasing its size and putting more pixels into one QR code .Currently, there are 40 different versions of QR codes which support capacity ranging from 7 Bytes (Version 1) to 2953 Bytes (Version 40). However, there are always physical limitations for both the medium which showsa QR code and the device which runs a scanner. In order to make sure that the information stored in a QR code can be decoded by other devices, each module (the minimum unit in a QR code) should contain at least 4 dots in both of its dimensions. Thus, there would not be enough space to show a big QR code pattern on a screen since commonly these devices would not have a large screen. Also, the resolution of the camera of the mobile devices will not be capable to capture all the necessary information if there are too may pixels.

Therefore, the idea of simply putting more information into a single QR code is not practical on mobile devices. Accordingly, we should take other methods to extend its capacity.Instead of expanding it into space, we can extend its capacity by storing information into a series of QR code patterns, making each picture relatively smaller, but showing a series of QR code. Thus, the data can be transmitted in a more effective manner. Therefore, the physical limitation of the capacity of QR Code can be exceeded in this way.

To see more details, please down load this report: QRMotion. 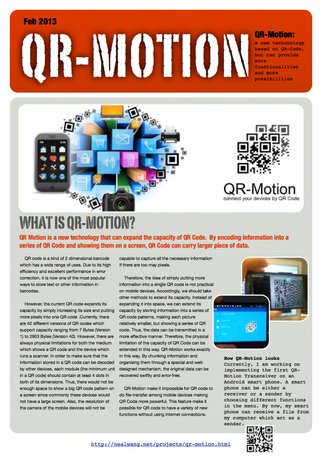 QR Motion is an ongoing project aiming on extending the capacity of current QR code. Instead of expanding QR code into larger area, QR Motion will extend the capacity of QR code by changing its pattern over time. Click here to see more about QR Motion